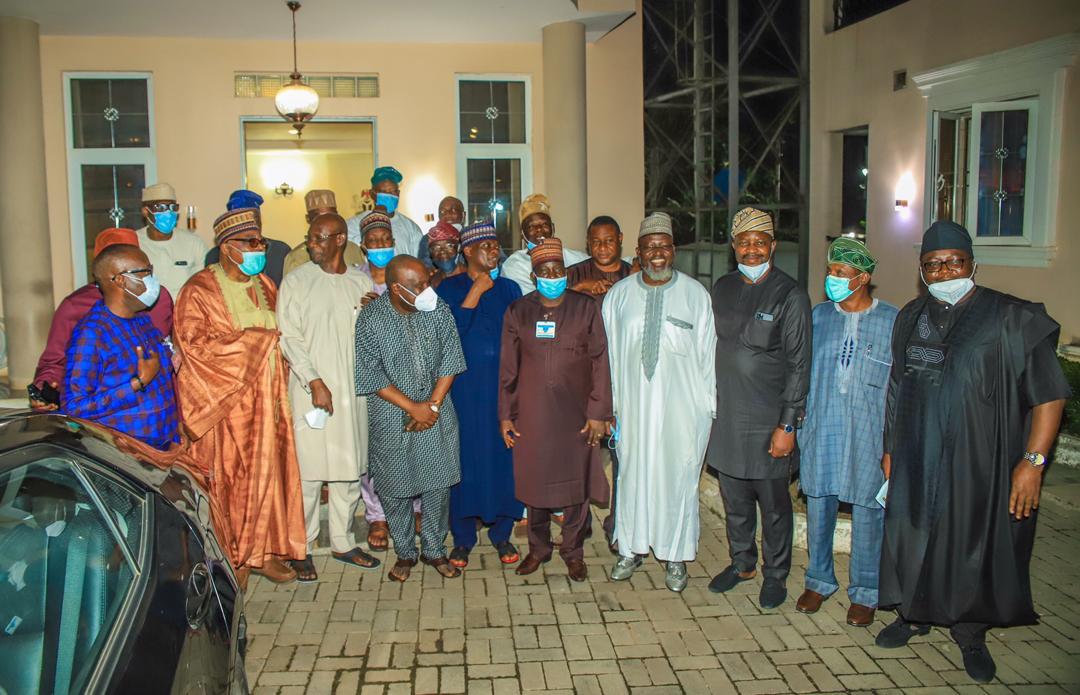 The governor Abubakar Badaru-led All Progressives Congress (APC) reconciliation have met with the party’s leadership and stakeholders from Oyo state with a view to bringing about genuine reconciliation and establishing lasting peace and unity between the stakeholders of the party.

A statement signed Friday in Abuja by the Deputy National Publicity Secretary of APC, Yekini Nabena, said a well attended meeting of the reconciliation committee held at the Plateau state government lodge on Thursday in Abuja, where all the leaders and stakeholders pledged to work together in ensuring APC become strong and formidable party in Oyo state.

The statement said that aside Abubakar Badaru who is Governor of Jigawa state and Chairman, other members of the Imo, Ogun and Oyo states reconciliation committee are governor of Plateau state, Simon Lalong; governor of Ekiti state, Kayode Fayemi; governor of Nasarawa state, Abdullahi Sule and governor of Gombe state, Muhammed Inuwa Yahaya.

The Chairman of the APC Caretaker/Extra-Ordinary National Convention Planning Committee and Governor of Yobe state, Mai Mala Buni recently inaugurated the reconciliation committee inline with its mandate to achieve peace building, true reconciliation and to give every member a sense of fairness and belonging.

Related Topics:Featured
Up Next

DSS Invitation: My Life in Danger, Mailafia Cries Out

The unusual emergence of a 40years old unusual Guy as the Chief Executive Officer superintending the unique State of Kogi from LUGARD HOUSE, Lokoja was a stunner. Yahaya Adoza Bello was in every mold different from the pack, having been in Politics for less than two years before he became the Governor of the Confluence State of Kogi, and that reality set the stage for an unusual protocol in governance.

Born on the 18th day of June, 1975 and sworn into office as the Executive Governor of Kogi State on the 27th day of January, 2016, the Youngman popularly referred to as GYB an acronym for Governor Yahaya Bello, is a true leader of men/women, a patriot and a credible manager of resources.

Vilified, lampooned, hated and castigated by the political establishment on account of his unusual emergence on our political kaleidoscope, GYB refused to join issues with his traducers but to silence his critics through unequaled service delivery. Harassed and harangued by Godfathers, he chose silence deciding to endear himself to all through responsible and responsive leadership. And troubled by career politicians at home and across the nation, he chose hard work over propaganda, and that is the enigma called GYB.

Understanding the enormous challenge on him being one of the foremost Youths in leadership, he refused to deploy propaganda in the discharge of his watch over Kogi State, but to speak through profound service delivery, and here we present the 21 things that qualify GYB for higher office, indeed the 21 REASONS GYB STANDS OUT.

1. GYB inherited a State that was largely divided on ethnic, religious and cultural grounds, but undeterred he chose to unite his people indiscriminate of the multi-ethnic, multi-lingual, multi-religious, and multi-cultural tendencies of the State. The Igalas, Igbiras, Okuns, Owore, Owe et al found in this enigma a worthy son. This he did by locating infrastructures across the State, appointing the best hands indiscriminate of ethnic or religious differences, and being a Muslim he is the first Governor to build a CHAPEL for Christian worship in the Government House. GYB believes that though tongues, faith and tribes may differ that Kogi State is ONE. And he will replicate same in higher office.

2. GYB has made Kogi the safest State in the North Central and indeed the entire North through the proactive cooperation of his government with all the layers of National Security and indeed the setting up of a very effective Kogi State Vigilante Service. The records are visible, that being the Confluence State and the doorway to the South from the North and vice versa, Kogi State today has the least tale of violent crimes, kidnappings and banditry, thanks to the Astute watch of GYB Governor Yahaya Bello (GIVE YOUR BEST), the one who GIVES HIS BEST.

3. GYB is a bridge builder, he has seamlessly integrated both the OLD and the YOUNG in the governance of the State, little wonder Kogi has become a spectacle in peaceful coexistence. Nigeria has got something coming from this Youngman.

4. GYB is an unblemished Patriot, he has in an uncommon way shown how doggedly he loves his people, Kogi State and indeed Nigeria by insisting that we interrogate the COVID19Post pandemic, and stop the now prevalent copy and post approach to the scourge. He has spoken boldly against another possible lockdown of the economy because ‘we must first live to fight a disease’. And Kogi State has apparently remained COVID19 free because of the unusual approach of the State to the pandemic. GYB is a leader that thinks outside the Box, and a patriot per excellence, he is indeed one largely deserving of higher office.

5. GYB inherited months of backlog of unpaid salaries in his first term for which he was largely lampooned, vilified, hated and castigated, but rather than fight or disparage his critics, he went to work, today Kogi State does not owe a worker, and today KOGI STATE effectively pays her pensioners.

6. GYB’s State of Kogi leads the chart of States that has serviced and reduced her Local debts; indeed the Debt Management Office has it on record that Kogi State has recently reduced its local debts by a whooping 51Billion, and the State next on the Chart by about 20billion. The silent Achiever Governor Yahaya Bello has GOT YOUR BACK and he wants to do the same for Nigeria.

7. GYB’s Kogi State led the pack in the total resources that accrued to the Nation during the last COVID19 lockdown because Kogi State maintained very minimal lockdown, and remains the State with the least COVID19 mention.

8. GYB is a study in leadership, and a course in proactive and progressive service delivery.

This expose’ on the Youngman whose acronym GYB stands for GOT YOUR BACK, GIVE YOUR BEST and GROW YOUR BASE is the story of a leader with passion, competency and capacity, and one deserving of the trust of higher office. 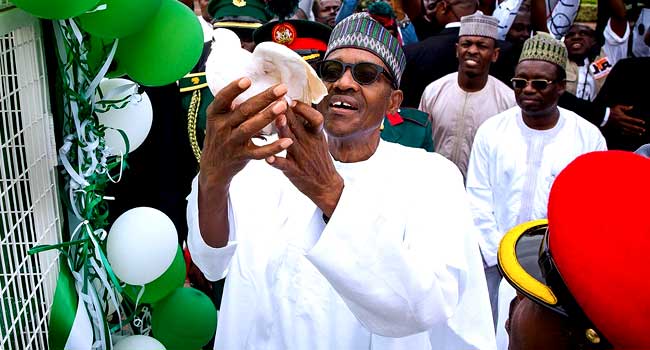 The doves, otherwise known as white pigeons, released by the President, Muhammadu Buhari, at the Armed Forces Remembrance Day ceremony, refused to fly despite multiple attempts by the President thereby sparking a debate on social media on Friday.

The President had opened the birdcage at the National Arcade, picked up one of the doves, and thrown it into the air but the bird landed atop the cage and refused to fly.

Buhari, who was eager to let the white pigeons fly, opened the roof of the cage in a bid to send them all out but the birds remained adamant and decided to sit on top of the cage’s roof.

The President, who appeared tired of trying, soon left the birds and returned to his seat. Moments after the President had left, however, some of the birds flew.

The ritual of releasing doves is to commemorate the life of a departed loved one and is common at significant events like funerals or memorials. It also signifies peace.

Studies show that domesticated doves which are used to living in cages are not always keen on flying.

In 2014, the doves refused to fly when former President Goodluck Jonathan freed them. The Spiritual Director of the Adoration Ministry Enugu, Rev Fr. Ejike Mbaka, described the incident at the time as a sign that God had abandoned Jonathan.

The refusal of the birds to fly on Friday, however, sparked thousands of comments on social media.

A former presidential aspirant of the All Progressives Congress, Adamu Garba, said the birds should be eaten if they cannot do what they were trained to do.

“The pigeons are tired and overtime became lazy, they don’t want to fly the spirit of The Nigerian Flag. We should roast them at Suya joint and deploy Crowwe for action,” he said.

Social media personality, Morris Monye, said the Department of State Services would have arrested the pigeons for embarrassing the President if they could.

“I guarantee you… If it was possible, the DSS would arrest the pigeons for such an affront on the President. But really, is there peace, harmony, and security in the land?” he asked.

A former Minister of Education, Oby Ezekwesili, who is a known critique of the President, also tweeted, “Hmmm. Even the pigeons in Nigeria.”

2023 Presidency: 10,000 Youths To Trek From Lagos To Bauchi For Bala Mohammed

A youth group launches what it calls “Bala Initiative with 10,000 youth foot-match from Lagos to Bauchi”, to prevail on Governor Bala Mohammed of Bauchi State to aspire to become the President of Nigeria comes 2023.

The group called South West Youth Coalition in a statement says it resolved to trek to called on the governor to join the race for the presidency following the tremendous achievement of Governor Bala Mohammed as governor of Bauchi.

The group says the 10,000-youth match from Lagos to Bauchi was aimed at begging Nigerians from all the six geopolitical zones of the country to prevail on governor Mohammed to join the 2023 race.

The coalition says among other things, governor Mohamed has the potentials to address the defiant Boko Haram insurgency in the north-east in addition to infrastructural development, he will unleash across Nigeria.

“Over the years, since the election of governor Mohammed as the executive governor of Bauchi State, the people have continued to witness tremendous progress in all sectors, especially in areas of security.

“According to records, Bauchi State is one amongst the few northeast states which have remained secured against insurgencies, bandits’ attacks and other forms of development witchcraft, because the Governor has demonstrated astuteness, commitment and dogged abilities in supporting the growth and development in Bauchi State”, the statement read in part.

The convener of the group, Mr Oladimeji Lanre says the fight against insurgency and other forms of development, ineptitude needs an experienced “and tested and trusted northeast leader who has the capability to restore peace, good governance and public confidence.”

He said the south-west youth leaders have vowed to personally make their financial contributions to obtain a nomination form for governor Mohammed ahead of the 2023 presidential race.

The convener said his group is expanding its tentacles by reaching out to youths and other social groups in other regions of the country to woo support for Governor Mohammed.