Upon Femi Falana, The Blood Of The Innocent

October 29, 2020 by kwararafareporters No Comments 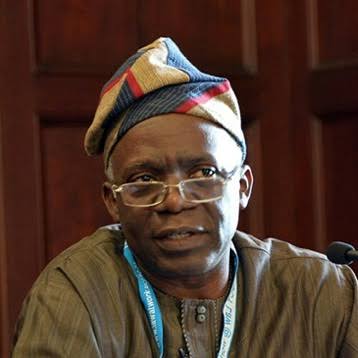 Self-styled activist, Femi Falana (SAN), must be proud of what he has gifted Nigeria – a celebrity activist son, Falz, a key inciter of the #EndSARS protests that almost sent Nigeria back to the stone ages but for the timely intervention of the real patriot. This piece is however not about Falz, there would be another time to talk about the destabilization campaign unleashed on Nigeria by the community of bards, who at other time in history would have been starving. This piece is about Falana, the father, and the blood of the innocent dripping from his hands and trickling down the corners of his mouth like a vampire.

There is something unsettling about the way and manner the Senior Advocate has been persistent in demonizing the current administration. Not that Falana demonizing a government, any government, is a new thing. The concern here is that this same man would have been quoting legal tomes backwards had his one life ambition of becoming part of the government been met. Not everyone has forgotten that he was a staunch supporter of President Muhammadu Buhari until the position of the Attorney General of the Federation and Minister of Justice went to another person. The Hell broke loose for this government since that mistake was made in the view of certain persons.

In the interventions that busybodies have made on the #EndSARS saga is distressing for the very reason that the premises of such exercise are faulty. The greatest fault being that people like Falana speak in absolute terms without recourse to what had transpired in the past and without regard for the impact that the decisions of now will have on the future. For instance, Falana – with celebrity activists like Aisha Yesufu, Deji Adeyanju, Omoyele Sowore, Reno Omokri and the hip-hop crowds of his son – simply ignored the decades of missteps by previous government and landed the entire blame on the incumbent administration. What this did was to incite the protesters against the government of the day, one would agree that government is a continuum but at what point should a balance have been struck to prevent the kind of chaos unleashed on the country?

All the panels investigating the violent protests and the associated looting must review the role played by past inciteful comments in throwing protesters into the frenzy of destruction they embarked on. Each day that the likes of Falana had penned venomous articles, granted toxic media interviews and threw shades at those in government was a building block in building the evil structure that almost ruined the country. Falana and his co-traveler did not engage in such activities in ignorance. What they did was systematic, a sustained campaign of incitement that could have let to only one outcome: an angered populace that egged to attack the government of the day and possibly illegally overthrew it through mob action.

Even after the protests began, at the innocuous stage when the exercise seemed justified, the expectation would have been for true statesmen and elders to take on mediatory roles. It would have counted for something if the elderly people that had been inciting the younger part of the population had urged caution, including the need to not engage in a long-drawn protest, which naturally has the vulnerability of being hijacked by criminals. No. That is not the Falana way. He continued to edge the protesters on.

Then the violence began. Still Falana did not relent, neither did he resort to the silence that would have been considered as befitting of his stature in view of his wholesale embrace of violence. He rather increased his verbal attack on the government and functionaries. If the other clout chasers are bereft of sense to stop inciting protesters, Falana, with his legal background should have known better. Instead, Falana, by his various utterances, TV appearances and public statements incited the youth.

The result? The Falana incited protesters went on a killing spree that resulted in several law enforcement personnel being killed by a mob that has been programmed to see itself as being on a vengeance mission against those in authority. The blood of the innocent is on Falana’s hands and as he continues to spew venom, the blood drips from the corner of his mouth.

There are those in government who have also failed to call Falana to order even when they have the responsibility to. The Vice President, Professor Yemi Osinbjo and political bigwig, Asiwaju Ahmed Bola Tinubu are culpable in the inglorious murder of innocent Nigerians by not prevailing on their political charge, Falana.

Their failure to rein in their estranged associate could end up confirming conjectures that they are connected to the incitement of the mob to kill innocent Nigerians, especially the gruesome murder of police officers on lawful duty across several states of the country.

Given his penchant for throwing the International Criminal Court (ICC) in people’s faces when defend his terrorist Islamic Movement in Nigeria (IMN) clients, it is time to make Falana appear before the Court at the Hague, not as counsel but as suspect on trial for instigating a pogrom against policemen and public office holders, and for putting the lives of all Nigerians at risk through the same incitement. I strongly recommend that the genuine human rights activists in the country rise up to this national challenge of dragging Falana before ICC at The Hague and his associates with him.