General Buratai And His Devotion To Fatherland – By Abubakar Gana

November 17, 2020 by kwararafareporters No Comments 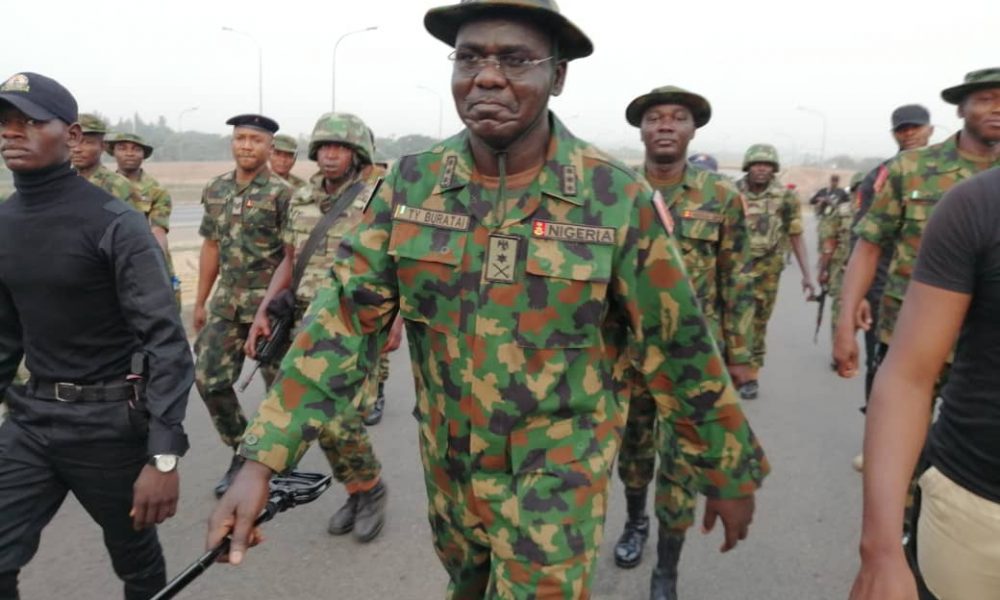 The greatest gist in Nigeria today among the country’s senior political harbingers, former leaders, and political elites is the sustained mockery of Nigeria’s Service Chiefs. Though, the sitting Military Chiefs have posted very relieving results in the last five years, fighting the conspiratorial or instigated insurgencies and insurrections hovering in some parts of Nigeria, but to some partisan senses, neither President Muhammadu Buhari nor the Nigerian Military deserve such prestigious national honour.

Amazingly, those who complain loudest all the times are either some of the current or former leaders of Nigeria who laid the foundation of the country’s insecurities and the degeneration. Possibly, God snatched their wisdom whilst in office.

And therefore, today, these ideas from an odious political elite have come back to them so bitingly. But it does not prevent clairvoyant Nigerians from sighting the devious intentions. They think of their odious selves as better leaders than President Buhari and so, Mr. President must accept their advice on how to administer Nigeria, especially on security.

That Nigeria’s COAS and leader of the counter-insurgency operations, Lt. Gen. Tukur Yusuf Buratai and his colleagues’ in Nigeria’s Military hierarchy of Service Chiefs are intentionally uncelebrated by some Nigerians is because the hate is deep and malevolent! No one is forcing the few discontented Nigerians to notice the difference Nigeria’s counter-insurgency operations under the commanding height of the present Service Chiefs. No one controls a man’s thoughts!

Nevertheless, Gen. Buratai stands very tall because he voluntarily decided on a military career and conscripted himself into the Nigerian Army; underwent the stipulated training and formally joined the Army in 1983 to render service to fatherland and humanity globally. Until the COAS was so elevated to the exalted position of Nigeria’s number one soldier, he excelled as a properly trained infantry combatant in all assignments on the field within and outside the country.

Buratai himself hails from the lineage of warriors in Biu village of Biu LGA of Borno state, one of the states, regarded as the epicenter of Boko Haram insurgency. His biological father, the brave elder Papa Buratai, who died just last year was a World II veteran of repute under the British-controlled Royal West African Frontier Force (RWFF) and lived several decades after it.

After returning from the Burma wars under the British empire, Papa Buratai also undertook another risky job of ship escort guard with a shipping company in Lagos for years, but still braved the odds, retiring to a quiet life in old age, until he answered the divine call to reunite with his Creator last year. A man of Papa Buratai’s exploits cannot give birth to a weakling who has delightedly chosen his career as a Nigeria’s soldier.

That’s why Gen. Buratai does not sit in Abuja and bark orders to troops in the Northeast; but leads the battle from the front and in the trenches with his troops energetically. Nigerians who do not appreciate Gen. Buratai’s steadfastness on fighting Boko Haram and ISWAP terrorists to a standstill cannot regret their myopic reasoning even in the next world of reincarnation.

There is no greater sacrifice one can render to his nation than defending its unity, togetherness and territorial integrity against external aggressions. This is what Gen. Buratai has done for decades in his military career. In America where Nigeria borrows its leg of democracy, at least 29 former American Presidents who served their country in the Armed Forces are usually prouder than others.

The likes of George Ford, the famous Jimmy Carter; Richard Nixon; George H. W Bush, Ronald Reagan and hordes of others are proud to render their services to nationhood, like President Buhari, who has appointed his moniker, Gen. Buratai to oversee the Nigerian Army.

Gen. Buratai had the opportunity to practice a profession that was more secured based on his innate brilliance as noticed today, but he opted for the Military. For the sake of patriotism, Gen. Buratai decided to put his life on the line to defend his fatherland as a soldier. And he intends to outdo the military records of his late father.

When President Buhari appointed Gen. Buratai as Nigeria’s 26th COAS, he pledged his total dedication to duty and loyalty to the Commander-In- Chief of the Nigerian Armed forces, President Buhari. Quite honestly, credit must be given to Buratai because he has shown over the years that Nigeria comes first before self-interest and must be defended at all times by every Nigerian.

And his commitment to Nigeria these few years has remained the plank of a united Nigeria, despite the conspiratorial gang-ups and upsurge of terrorist’s attacks, criminal activities of militant groups in the Niger Delta and agitations from Nnamdi Kanu’s outlawed IPOB. But it only conveys one message; and it is that Gen. Buratai is firmly convinced about the necessity of the defence of his dear nation; a silently saying a regenerated Nigeria for today and tomorrow is possible.

The Army Chief’s appointment in 2015 couldn’t have been timelier and more strategic. The country was in dire need of a messiah to salvage the country from insecurities as the nation drowned helplessly. Gen. Buratai is an adroit defender of Nigeria’s democracy in the country’s most turbulent times.

Nigeria faltered badly because former commanders of Nigeria’s counter-insurgency operations had shakable loyalty to Nigeria and their Commander-In-Chief, unlike Gen. Buratai has unveiled on President Buhari these years.

The Army boss has tirelessly worked and supported democratic governance in Nigeria. Even when some mischievous political elements wanted to take advantage of President Buhari’s several medical absences to truncate democracy, by making overtures to some officers and soldiers for political reasons, Gen. Buratai fervidly stood against it.

He warned them to be wary of the consequences of their actions, telling the intending coup plotters not to make any attempt at truncating the nation’s democracy. The Army Chief was emphatic, warning Army officers to steer clear of politics. He asked those interested in politics to resign from the Nigerian Army to pursue their new found ambitions.

In his interview with BBC’s Stephen Sackur, in July 2017, Gen. Buratai clearly sounded; “there is no leadership vacuum,” explaining it as a pre-emptive caution, based on past experiences.

“There is no vacuum, it’s just a sort of pre-emptive warning in terms of what transpired before this administration came on board. Based on our own knowledge, based on our experiences, it is good once in a while to tell officers that there are bounds that we must remain within the constitutional boundaries. There are constitutional provisions; there is never a vacuum. We have an Acting President there. I think whatever is happening, we should allow Mr. President to recuperate, get stronger and go back home.”

Again, and again, Gen. Buratai has never failed to drum it into the ears of soldiers and men of the Nigerian Army. At the opening ceremony of a seminar for Commandants, Bursars and Administrative officers of the Nigerian Army on August 1, 2019, in Abuja. Gen. Buratai retold his preachments on politics as the non-negotiable loyalty of the Nigerian Army under his leadership to Mr. President and the country. He urged officers to remain apolitical, take right actions and show commitment to constitutionally defined obligations.

Again, Gen. Buratai roared; “We need to remain absolutely loyal to Mr. President and Commander-in-Chief of the Armed Forces and the Constitution of the Federal Republic of Nigeria. This is a non-negotiable part of our profession.”

Furthermore, at the commissioning ceremony of the entrepreneurial skills acquisition centre, Transit Accommodation and the newly built accident and emergency ward of the Nigerian Army Medical Hospital at the 23rd Armoured Brigade, Gibson Jalo Cantonment in Yola, Adamawa State on December 28th, 2019, Gen. Buratai also echoed to soldiers to be grateful to their nation, keep faith and loyalty to the FGN led by President Buhari.

His persuasive words vibrated; “I want you to keep faith, be focused and loyal to the Federal Government and be grateful of the leadership of President Muhammadu Buhari, for his support to the Nigerian Army. Therefore, I wish to pledge the commitment and unalloyed loyalty of officers and soldiers of the Nigerian Army to the President and the defence of our democracy.”

Scarcely in Nigeria’s existential political history would a leader of the Nigerian Army display such fondness of loyalty to a sitting President and a passion for the defence of the country’s democracy. The few can doubt, but the current Nigeria’s Army Chief iconic leadership has sensitized and strengthened the military generally as a subordinate institution to civil rule and democratic institutions of the country.

Indeed, Buratai has sacredly remained a reference pillar of loyalty, love for the country and dedication to the nation’s peace and security under a democracy. Unlike others, and undauntedly, Gen. Buratai hungers every day to disarm the wings of criminals and tormentors of Nigeria for a country totally exculpated from the strings of insecurities. In every sense, he is indeed, the finest testimony or portrait of absolute loyalty to Nigeria and the Army’s mirror as subordinates to democratic institutions of a country.