The Nigerians in Diaspora Monitoring Group (NDMG) has applauded President Muhammadu Buhari for the nomination of former Chief of Army Staff, Lt. Gen. Tukur Buratai (rtd) and three other immediate past service chiefs as non-career diplomats.

In a statement signed by its Secretary-General, Raymond Egule, on Thursday, the NDMG said it is elated at the development, noting that it is a reward for hard work, diligence and dedication.

According to Egule, this has confirmed that no amount of mudslinging and campaign of calumny can tarnish good names that are built on service to humanity.

The group noted that the nomination of ex-COAS Buratai, in particular, will boost multi-national coalition against terrorism.

The NDMG assured that with their experience, exposure and new challenge, the reign of Boko Haram will come to an end in the country.

The Nigerians in Diaspora, however, urged the Federal Government to post the former military heads to the United States of America, United Kingdom, Russia and France to ensure that Nigeria and other nations benefit immensely from their wealth of experiences and passionate dedication to securing the country against destabilizing influences.

The group also charged the nominees to again surpass Mr. President’s expectations as they did with their just-concluded military assignments.

Their appointments are affirmation that Nigeria continues to cherish hard work, diligence and dedication to the fatherland while validating the axiom that the reward for hard work is more work. The appointments have confirmed that there is no amount of mudslinging and campaign of calumny that can tarnish good names that are built on service to humanity.

NDMG is especially pleased that retired General Buratai’s nomination for the ambassadorial position will boost multi-national coalition against terrorism as we envisage that he will continue the war he had waged against terrorists on a higher plane by leveraging his new appointment to starve Boko Haram, ISWAP or whatever brands they chose to operate under of the foreign support that has made it possible for the terrorists to regroup each time they are degraded and defeated.

We anticipated that the international awards -across Europe, the USA and even Brazil – as well as the enduring networks that Buratai has built in the course of his career and particularly during the years he led the charge against terrorism in Nigeria, are national assets that would come in useful at a time that those who stepped into the shoes of the erstwhile service chiefs could use all the international leverage they could get.

The former Chief of Army Staff had also sufficiently demonstrated that he has the firmness to relate with foreign counterparts in a manner that asserts Nigeria’s status as an equal partner to whichever country is being related with. This is something that is much needed at a time that President Buhari has boosted Nigeria’s status as a nation that is strategic to global decisions.

Our group is of the strong view that the diplomatic value that General Buratai and his counterparts are coming on board should not be wasted. We consequently urge the Federal Government to post them to the United States of America, United Kingdom, Russia and France to ensure that Nigeria and the rest of the country benefit immensely from their wealth of experiences and passionate dedication to securing the country against destabilizing influences.

They have prosecuted the war against terrorism to a point where what is needed is the buy-in of these identified strategic nations to starve off the foreign support that has sustained the terrorists’ insurgency. It is an interface that the country urgently needs to move the war against Boko Haram/ISWAP to the next phase of building international consensus against the terrorists.

While appreciating President Buhari for these strategic nominations and saluting his doggedness in identifying reputable citizens to serve the country, we urge the nominees to again surpass Mr. President’s expectations as they did with their just-concluded military assignments.

We wish them resounding success in their new roles.

Group Warns Against Smear Campaigns Targeted At Buratai, Other Patriots That Served Nigeria

One Nigeria: Full Text of Governor Yahaya Bello at the Public Lecture and Award 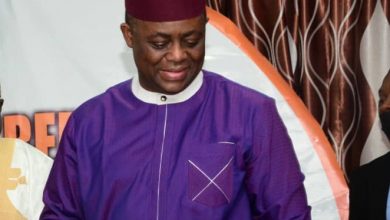 One Nigeria: War Is Not The Best Way Forward For The Country – Femi Fani-Kayode