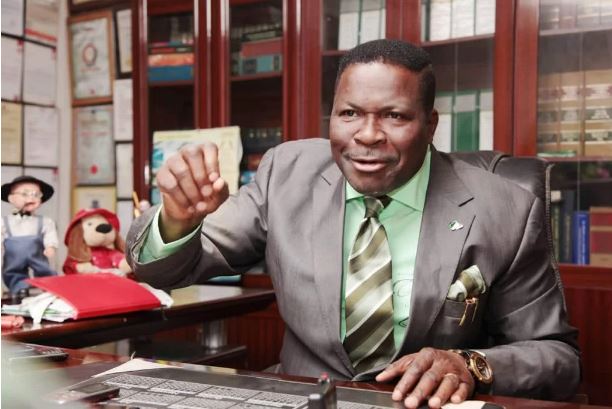 The court has now dismissed an appeal filed by the EFCC challenging the order directing the commission to unfreeze the accounts of a legal practitioner, Mike Ozhekome (SAN).

The two other members of the panel who concurred with the judgement are Justice Tunde Awotoye and James Abundaga.

At the instance of the EFCC on April 3rd 2017, Justice Abdulaziz Anka of the Federal High Court, Lagos had lifted a restraining order he earlier placed on the Guaranty Trust Bank (GTB) account of Ozekhome.

The EFCC had obtained the interim ex parte order of forfeiture to freeze the money for 120 days, arguing that the sum of N75million transferred to the account was proceed of unlawful activity, because it was paid to Ozekhome by the then sitting Governor of Ekiti State, Ayodele Fayose, whom it said it was investigating.

Ozekhome on his part had argued that the action of the EFCC was unconstitutional, had no legal justification and was a gross violation of sections 36, 37 and 41 of the 1999 Constitution.‎

He filed a motion before the Federal High Court, Lagos, urging it to set aside its earlier order freezing his chambers’ account. He alleged misrepresentation, non-disclosure, suppression of material facts and non-compliance with the rules of the lower court and Judicial authorities regulating the grant of ex parte applications by the Appellant.

Justice Anka after hearing arguments from Ozekhome and Mr Rotimi Oyedepo for the EFCC vacated the ex parte order and unfreeze his account with Guaranty Trust Bank (GTB).

Apparently dissatisfied with the ruling, the EFCC filed an appeal before the Court of Appeal alleging miscarriage of justice by the lower court.

The anti-graft agency had argued that whilst the silk is entitled to his professional fees, he is not entitled to receive such from funds suspected to be proceeds of crime.

In dismissing the appeal, the appellate court held that the EFCC had wrongfully obtained the ex parte order to freeze the account as the lower court lacked the jurisdiction to grant same and as the defendant could not have committed any infraction to warrant his account being blocked and frozen.

The upper court further held that there was contradictory evidence shown in invoices and receipts issued by Ozekhome to Fayose and the said sum represented part payment of his professional fees in the handling of various cases for Fayose across the country.

On whether a legal practitioner is legally obliged to begin to ask a client for the very source of his money from which the client desired to pay a lawyer, the court said there was no such requirement known to law.

“A Legal Practitioner is entitled to his fees for professional services and such fees cannot be rightly labelled as proceeds of crime.

“It is not a requirement of the law that a legal Practitioner would go into inquiry before receiving his fees from his client, to find out the source of the fund from which he would be paid.”

It would be recalled that sometime in 2016, the EFCC had, through Justice Ibrahim Idris, then of the Federal High Court, Lagos, frozen Governor Fayose’s accounts, accusing him of allegedly keeping proceeds of unlawful activity.

In his judgement, Justice Taiwo found that the freezing order had been improperly granted without jurisdiction in the first place, and upon suppression of material facts.

After this judgement, Fayose went to his bank and withdrew the sum of N5million from his account for himself, while transferring N75 million to Ozekhome, as part payment of his professional fees.

The EFCC immediately appealed this judgement, and then went ahead to freeze Ozekhome’s account, contending that the N75 million paid to his chambers by Fayose as professional fees for legal services rendered as a proceed of unlawful activity.