The Peoples Democratic Party has said it handed over a united and stable Nigeria to the All progressives Congress government led by the President, Muhammadu Buhari .

This is in response to a statement issued by the APC which claimed that the insurgency which its government is facing was inherited from the administration led by the PDP.

The APC had said it was responding to “false claims by the Governor of Rivers State, Nyesom Wike, who lied that the Federal Government has lost control of the security situation.”

The statement read, “The Peoples Democratic Party (PDP) berates the All Progressives Congress (APC) for attacking Rivers State Governor Nyesom Wike, for exposing the failures of the APC and its administration, particularly their ignoble roles in the escalation of violence, killing and other acts of terrorism across our nation.

“The PDP asserts that Governor Wike, in stating that the future of our nation cannot be left in the hands of the APC, directly spoke the mind of majority of Nigerians across board.

“As such, any attack on Governor Wike, on this score, is a direct assault on the generality of Nigerians.

“Nigerians are aware that the PDP administration of President Goodluck Jonathan handed over a united and stable country to the APC and President Muhammadu Buhari after pushing terrorists to the fringes and conducting elections in all parts of our country.

“The APC has not denied the fact that it was on assumption of its office that terrorism resurged as APC leaders opened up our nation to terrorists, bandits and vandals, including those they brought in from neighbouring countries, as political mercenaries to assist the APC to unleash violence on Nigerians during elections.

“Also, Nigerians are aware of how the APC administration shielded terrorism apologists in their cabinet how APC leaders, on several occasions, made case for terrorists, asked Nigerians not to fight back in the face of aggression and even blamed victims of terrorism as witnessed in the case of 43 rice farmers who were beheaded by terrorists in Borno State.

“Our party notes that the APC has been deliberately compromising the security of our nation to allow for chaos, crisis and emergency situation in our country, for their selfish and unpatriotic gains.

That also explains why the APC always attack well-meaning Nigerians who seek to unveil their plots. It is indeed unfathomable how the APC and its government, with all the apparatchik of governance available to them, can be looking helplessly and forcing our country into a state of turmoil if the situation in which Nigeria is sunk was not their design.

“As Governor Wike had said, in line with the consistent position of our party, it is clear that the future of Nigeria can never be left in the hands of an obtrusively incompetent, insensitive, vindictive and violent happy mass of failures like the APC.

“Moreover, the APC and its government have no propensity for peace; it has nobody in its political den to proffer approaches for a peaceful community of people and that is why they are always running to the PDP product in President Goodluck Jonathan for peacekeeping assignments across Africa and other parts of the world. Of course, one cannot give what he doesn’t have.

“It is therefore unfortunate that the APC will choose to live in perpetual self-denial over its inability and failure to ensure peace, unity, orderliness and cohesion in our country.

“Our party wants the APC to know that while they may gag their own members, they cannot stop other well-meaning Nigerians like Governor Wike from exposing the atrocities and failures of the APC.”

Buhari and His Government Have No Blood in their Hearts – Kukah 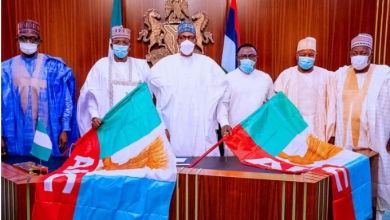