“Brave, courageous, intelligent and outspoken. The Hafsat that I know, is never given to playing the lackey to any opportunistic grabber and never a rabble rouser. So to those who have ears, let them hear.” – An Elder Statesman From the South West.

I elected deliberately to open this intervention with the above quotable quote of a Seventy something years old intellectual from the South West State of Ondo. And I must add that we know Hafsat Abiola-Costello, we know her pedigree, we know her passion, we know her fight, we know her persuasions and we know her doggedness, so we aren’t going to let no nonstarter rubbish her.

She knows her onion and she is worth every pint and pinch of her salt. She knows the Abiola phenomenon, she knew her Father, she was orphaned by the Struggle having lost her Mom Kudirat Abiola first to the Abacha infamy, and her Dad MKO Abiola later on. She and her siblings bear the gravest and the greatest scars of the June 12 struggle, and she insists that the dream for which she lost her both parents will not die. She is almost 5 decades old, she is clearheaded and sagacious, so may the dart throwers do some introspection and soul searching.

She could not have compared GYB with MKO for nothing, she has her facts, and they are beyond beer parlour tales and inveigle. Her both parents were martyrs for democracy, and she insists that their martyrdom will not be in vain, that HOPE must resonate yet again, and that with GYB Nigeria is on THE MARCH AGAIN. Remember that famous HOPE 93 campaign song? If you know, you know.

MKO was a great philanthropist and a lover of humankind. He was the Pillar of Sports in Africa. And a motivation to the teaming Nigerian Youths. GYB is a philanthropist and a leader with a heart of gold. He is a formidable sports lover and supporter of Sports in Nigeria. His person and ambition has attracted the highest support of sportsmen and women in Nigeria and that is instructive. And Kogi State within the past two years have hosted more Nigerian Sporting greats than any other state in Nigeria. Need I also state here that GYB runs the highest youth inclusive government in today’s Nigeria. Like MKO would have done, GYB is doing.

MKO had a thing for women and indeed the womenfolk and so does GYB. Apart from both of them having married more than two wives, they both believe in the competency of the female homo sapiens. They give responsibility to women and they believe completely in their competency and capacity. MKO entrusted his wives with the management of some of his businesses, so has GYB done. And even more remarkable is the fact that Governor Yahaya Bello GYB runs the government with the most gender parity in Nigeria. GYB has empowered more women than any Governor or government in today’s Nigeria.

MKO was brave, dogged and sagacious and so is GYB. MKO pioneered and deepened the call for reparation (that the West must not only return the wealth stolen from Africa but atone materially for the ills of Slavery), and GYB has consistently argued for Africa to look inwards, remember his position on the COVID-19 pandemic and allied issues. MKO was a nonconformist and so is GYB.

In their politics they were/are both men of means who supported their political parties, who seeing the drift in the polity if you like, chose to step in the fray by contesting for elective office. MKO pioneered the HOPE mantra in 1992/1993 and in 2022/2023 it is the resurgence of HOPE and the HOPE mantra by GYB.

MKO suffered and paid the supreme price for believing that a new Nigeria is possible. He fought for the mandate given to him on June 12, 1993 and was not willing to settle for less. GYB is fighting the battle and regardless of the beer parlour tales of naysayers and critics, he is saying that the great strides and achievements in Kogi State will speak for him. He is saying that his achievements in Security, Agriculture, Healthcare, Infrastructure, Financial and Fiscal Discipline, Job Creation etc will speak for him. And that the Youths and Women will not overlook the most gender and youth friendly candidate when we go to the polls. And God willing the HOPE will not die this time around.

Hafsat Abiola-Costello was not only correct, she was conservative in her comparison of the two larger than life phenomenons who are better known by their initials, MKO and GYB. Hafsat Abiola-Costello is eminently qualified to make her choices, like Hafsat, I Chris Mustapha Nwaokobia Jnr. a Lawyer and an Activist in Politics who fought with many others for the actualization of June 12 and the HOPE that MKO epitomized have since endorsed the GYB candidacy for the high office of President come 2023.

It is HOPE 2023 Compatriots, come join the movement for a New, Prosperous And Viable Nigeria. WE MOVE!!! 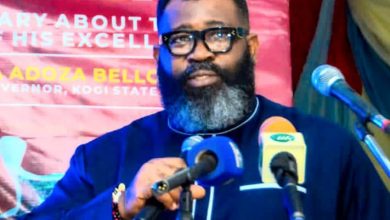 Obi Supporters Are Not Rude, They Just Want to Take Back Their Country – Prof Nwaokobia Jnr